We had a pleasant little surprise this particular morning en route to breakfast. Some of us were waiting for the coffee (you can just count on that word appearing in the beginning of every post regarding this trip) to be put out on the table, sitting outside of the main office, when someone discovered a little kitten. Like a stick of buttah I started to melt; just like I cry during all of the ASPCA commercials with Sarah McLachlan. Somehow he adopted the name Joe. Well let me tell you, Joe was smart. He followed us over to breakfast where he made many friends and scored some pieces of toast. Cute little kitten nugget! All I began to think about were the possible ways that I could smuggle little Joe into my luggage back home to Charleston at the end of the week…

The team was up and on our way at 6:40 that morning. We had a decent little drive down towards the Republic of the Congo to a village called Bugoigo. Just before departing the hotel I overheard Joel, one of our lovely drivers, saying that there were typically baboon sightings en route to the village and that he wouldn’t tell anyone if we brought bananas with us in the van. Weeeellllllll you better believe that a bunch of ears perked up and my ass rushed to Joel’s van.

About an hour or so into our drive, we passed through a tropical rainforest. It was beautiful. You could immediately sense a change in the air – dense, warm and wet. Rumor was that deeper within the rainforest you would find chimpanzees in the trees. What I would have given to run into a chimpanzee! But I suppose that I could settle for baboons. As began our descent down into the Great Rift Valley our van slowed and we had our first wildlife sighting of the trip (at least for me). You would have thought that everyone in the van had just won the lottery with the amount of shrieking and screaming there was. We were just a little excited. Joel threw out bananas as we drove by the family and they all began to follow us. There was a mama with a baby hanging onto her belly for dear life running alongside the back window; so cute! We were also given fair warning – if they know we have food, they WILL try and join us in the van. So we had to keep the windows cracked. They’re cute but I certainly did not one riding next to me for the remainder of the trip.

Bugoigo was located right along Lake Albert. One of the biggest problems that this particular village faced was water contamination. They dealt with Cholera outbreaks about twice a year and that was something we were going to be on the lookout for on this particular clinic day.

We arrived in Bugoigo to a long line of people wrapped out and around the school buildings. (All of our clinic sites were village schools) On clinic day 3 I was assigned to a full day of pharmacy.  PILL PARTY! Whoop! Whoop! Juuuust kidding… sort of.  My little introduction, during the previous days, to the way things worked with all of the meds made me pretty excited about it. Filling scripts was like a puzzle and that made it so much fun. Let me mention also that pharmacy crew rocked out all day long thanks to Carrie’s blue tooth ipod speaker. Yeah buddy. 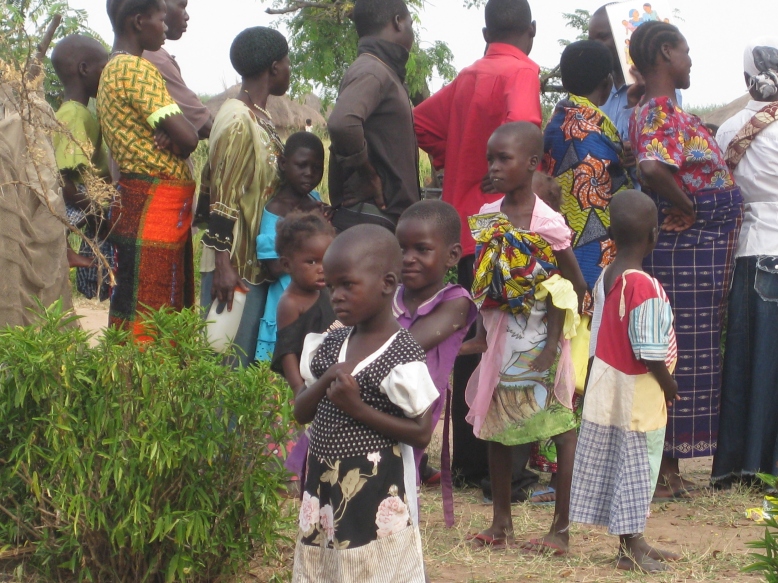 Patients in line waiting to seen at the beginning of the day.

Since we weren’t going to have scripts to fill right away, the patients were being registered, triaged and then seen by the providers, we pharmacy techs went outside to play with the kids. Our team members working kids ministry that day were in the middle of teaching the kids ‘Duck, Duck, Goose’ and ‘Red Rover.’ Some of us joined in on the fun and some of us stood by, cheered them on and captured some amazing shots like this one… (you’re welcome in advance.)

Have I mentioned the latrines yet? No? Oh well let me tell you about those beauties. Never again will I take indoor plumbing or any kind of plumbing for granted. EVER. AGAIN. And I also know why they refer to the toilet as a porcelain throne. Relieving yourself is anything but just sitting down and taking a load off – if you know what I mean. Nothing prepared me for the workout I was going to get in while attempting to go to the bathroom while at our clinic sites.

Picture this… A shack with a few stalls, some with doors that closed others with doors that didn’t and some without doors altogether. Mmm, yes. There were no air fresheners and let me remind you that the air was hot and dense. STINK-Y. Have you painted yourself a pretty picture yet? Each stall had a cement floor with a hole in the center the shape and size of a brick. I was expected to squat and aim into that?! Now I’m not going to get into the logistics but I will say this, men had it way easier when it came to this part of the trip and I got my abdominal workouts in whenever I was up for the challenge to conquer the latrines. How could I forget… was there toilet paper? Hah. Nope. Thank goodness for our little travel packs of tissues… when I remembered to bring them with me. Good thing my team members were better than me at remembering. Friends helping friends – that’s love, people. My favorite memory was in Katwetwe – not the cleanest of latrines I had encountered and apparently a small child felt the same way. Rather than brave it and do their business behind closed doors, I found a present on the concrete step outside. A cute little dump right there for everyone to see. Can poop be cute? This one was. As cute as cute poop could be.

On a typical clinic day I did my best to avoid the latrines. But on this particular day, nature came a callin’ rather early on into my morning. Go figure. Lucky for me, I wasn’t the only one. Allie had to go too. So we set off to find the loo together. Of course, this didn’t come without fun either… duh. Fun follows me wherever I go these days. As we neared the latrines, three cows came running (I promise I’m not exaggerating here. I have a witness, people!) straight towards us. They continued to run until they got about 20 feet from us when they decided to take it down to a trot. When they were uncomfortably close to us (we may have begun to shriek at this point) we went to the right and they went to the left. Obviously African cows have no respect for a person’s personal bubble. Sheesh. Since the cows had nearly scared the pee right out of me, the bathroom situation became somewhat of an emergency. When we finally made it to the latrines, Allie and I were both happy to find that they were the cleanest ones yet. SCORE! Aaaand I remembered my toilet paper. It was going to be a good day, I could tell. Especially since the cows left us alone on our trek back to the pharmacy. 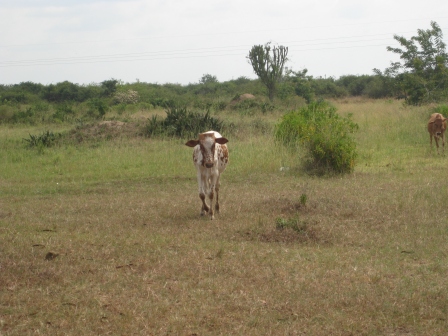 Carrie, Audrey, Allie, Kathy, Vern and I rocked it out in pharmacy. From topical ointments, antibiotics and aspirin to vaginal tablets, deworming meds and multi vitamins; we did it all! My job was to look at what the provider had prescribed. Ask a million questions and make sure that we had the dosage, etc. correct, fill it and then fill out the little stickers to indicate when the medication was to be taken. As the day came to a close and people were finishing up in registration and triage, more help came filtering in. Somehow we managed to stay right on top of all the prescriptions and by 5:30pm, we had seen and prescribed meds to our last patient. It may very well have been some kind of record. 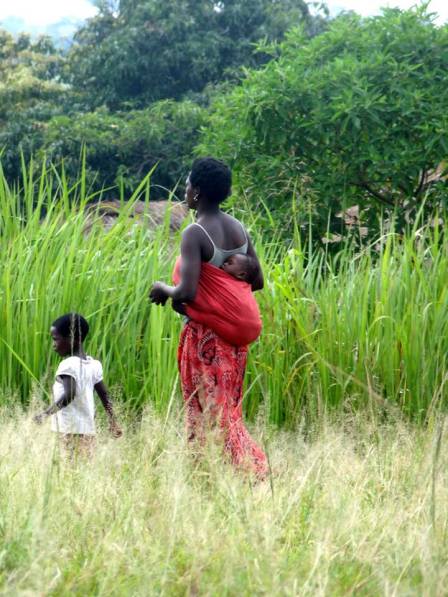 Providers playing with some kids after clinic was over.

After we had packed all of the vans up we spent some time with the kids and actually watched a professional soccer team practice which was pretty amazing. They continued to play even as cows ran through the field. Kids posed for us as we took their picture and immediately ran over afterwards to see themselves.

Kids love having their picture taken.

The ride home was beautiful. The sun was setting as we climbed up out of the valley and traveled through the villages scattered along the road. Kids waved wildly as we passed. Maize and cotton fields dotted the land. We encountered a few more baboons and some ground hornbills (large black birds with red faces that look similar to turkeys) along the way. 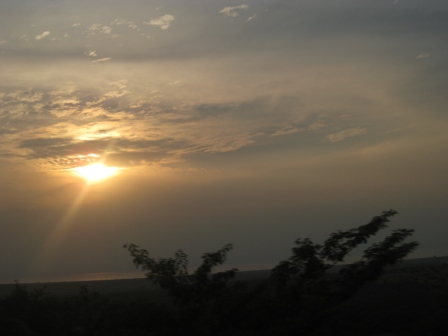 Since this was now the end of our third clinic day, my mind was beginning to fully wrap around the work we were doing. I was sitting in the very last row next to the window with my head resting on the back of the seat in front of me. It seemed like the first moment of solitude that day – and everything began to sink in… I was in Africa. Living a dream of mine; helping others who needed it most. Tears rolled down my cheeks as I watched the sunset out the window. My heart was literally full. And there was an overwhelming sense of peace that overcame my soul. As I sat up to look around the van, it seemed that everyone else was reflecting just as I was. We were all quiet; unbelievably beautiful.

When I turned back to look out the window, I noticed that in the course of an hour riding in the van next to the window, I had fallen victim to an African sunless tan; otherwise known as the orange African dirt flying caking my face and body. To say that I was desperately in need of a shower at this point is a complete understatement.

As we approached the rainforest, the air got damp, dense and much cooler. (At this point, my sunless tan began to weigh me down.) Again, that whole feeling of peace just surrounded everything – very hard to describe but I will hold it in my heart forever.

Around 7:30 our vans pulled into the Masindi Kitara hotel. We were all starving and practically ran to dinner. We heard more life stories from some of our teammates and lots of shout-outs from our clinic day. At one point, we were in the middle of eating when we heard meows coming from this rather large tree next to our table. Out popped Joe – right on time for dinner scraps. Hope also gave us our shillings for the week. 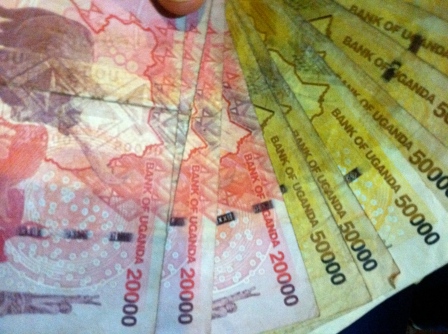 Lots of shillings to support the economy 🙂

My shower that night was borderline orgasmic. Luckily I was able to continuously remind myself NOT to open my mouth while under the water. The last thing I needed were for things to get dicey right in the middle of the week. Jumping into bed I knew that I would give thanks to the Malarone the next morning for the vivid dreams I was about to have…