One of my biggest teachers has been staring me in the face for almost my whole life and I’m just now realizing it. Better now than never, right? That’s what I’m sayin’. Typically we think of a teacher as a human being who has taught us an important lesson or many golden nuggets of knowledge. Whether it be learning material in school or a valuable life lesson – we apply our learnings to our lives.

We have all felt pain. Some of us deal with physical pain; maybe a result of disease or different-ability. Some of us deal with emotional pain; the loss of a loved one, perhaps. Maybe you have been through a tedious process that has required so much of your attention that it dances between extreme effort and ease. Whatever it may be, I think it’s fair to say that our first instinct is to run from it, put it on pause; do whatever it takes to take our name off the line-up of pain participants . It’s scary and über uncomfortable.

Pain, in all forms, is my prominent teacher. One that I have not been willing to learn from, until recently. Like most things in life, pain is a dichotomy. When the dark gets darker the light gets lighter. With whatever is bringing you down, find in it what makes you come alive. It’s a balance.

The list of the negative emotions that arise alongside pain goes on and on. Avoidance. Disbelief. Resistance. Frustration. Confusion. Anger. Fear. All of which have seemed to be better options for me the past five months. However, the more I turned to the unfavorable above, the more exacerbated the pain became. It was only when I invited my deepest, most intense discomfort in and cultivated the will to feel every ounce of it, no matter where I was or who I was with, that it finally began to ease up.

Let it in and let it go.

My avoidance has become tolerance. I have stopped shying away from the feelings that have the potential to label my day as a bad one. Tolerating the feelings removes the label and allowing the pain to be burning, stabbing, throbbing or downright overwhelming is proof that it is felt. It’s there, yes, and it does not control me. On the days that the physical pain has me so exhausted that the best I can do is lay in bed and nourish my Netflix addiction, I do just that. It isn’t lazy. I am healing.

When feelings of disbelief arise, I turn to hope. A new outlook fueled by the consistent reality that there is nothing I have except what is right now. [YOGA]. It’s what I have practiced for over ten years. Beyond the physical postures of asana, my yoga, right now, is the ebb and flow of sensations in my body and how I choose to react. There is no turning back, so press on. With hope, pain has become, not a road block, but a vital building block to a stronger me. The path is never permanently impeded. There is always another way.

No more resistance. Acceptance. It’s walking straight into the mess and recognizing the beauty pain can uncover. Nothing is forever. Some days are just plain shit. Yet those shit days, when I accept them and allow them to, can reveal the positive. People… opportunities… they arise. Say YES and go, do, be. Putting effort into what is practical, what can be done allows me to be forward moving.

In the face of fear, be determined. Pain is a path. It must be traveled, experienced and understood if you want it to pass. The emotions that arise in response are normal. And they aren’t meant to stay. They come in, linger and then leave.

E(motion)s : feelings meant to move through us in motion. Stop talking yourself out of it. Allow it to teach you. Don’t place blame and don’t feel badly about current circumstance. You’re never alone. Feelings are purposed to be felt, not suppressed. Be mindful. Acknowledge what is coming up and tend to it with compassion. You don’t need to know WHY. S l o w d o w n and respond. Clarity will follow. Smile, scream, cry, laugh, hug or ask for help. You’re in the driver’s seat. You choose.

Pain and all the baggage that comes with it, is something that I am really, really good at. No matter what form it arrives in. I expect it, I deny it and I hide it. Now I am taking FULL responsibility for it.

Don’t be fooled, this monster of an epiphany did not happen overnight. It has been gradual. And it’s only right and fair that I attribute my discovery, in part, to those who have opened my eyes and reminded me (more than once) that the negative (and positive) emotions are not permanent and there is ALWAYS something to learn.

During the last few weeks, pain, physical and emotional, has clouded my positive spirit. In doing what my body and soul demanded, literally laying around and just being with, whatever that looked like in the moment, I began to feel exhausted by my circumstances.

And then, in those painful days, opportunity arose.

A woman whom I admire dearly for her authenticity and knowledge, another big teacher of mine, was in Boston teaching workshops at YogaWorks this weekend. Alex and I met over a year ago in LA when I took a class with her at her home studio in Santa Monica. Instantly, my mind was blown. Never in my life had I felt so in tune with my body and all of its idiosyncrasies. Unlike any yoga asana I had ever done, I fell in love with her extensive knowledge and creative sequencing. A few months later, I found her in ATL at the Southeastern Yoga Conference and then this past February, she came to Charleston. 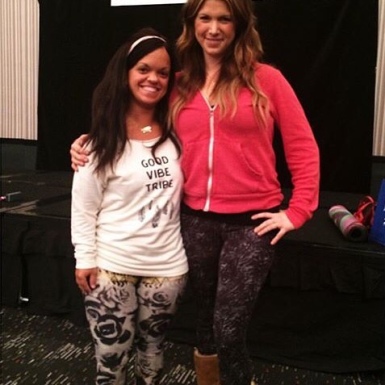 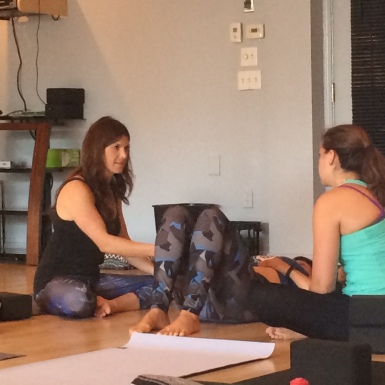 Wine(ing) not whining, in Boston.

Over the past five, very painful, months Alex has been a source of support and inspiration via intermittent text messages and e-mails. Consistently sharing affinity and love for the word FU@K and united belief in unicorns, her words are a constant reminder to feel and process everything.

Knowing she was in Boston this weekend, I toyed with the idea of going into the city to get a dose of her yogic badassery. For days I went back and forth on whether or not it would be wise to venture out of the house, non-weightbearing on my right leg and in a boot. Despite the pain and lack of mobility, I said YES and went. After conquering insane Boston traffic, thanks to my not so thrilled dad, and climbing a very large flight of stairs, there I sat, propped up on blankets and a bolster, crutches against the wall, in all my bionic glory among a room of able-bodied, fellow yogis.

Sometimes it takes spending a couple of days with another rebellious unicorn to reignite what you know. As my teacher/friend/fellow rule breaker, Alex practices what she preaches. Her idea of perfection encompasses all that she is.

This woman speaks my language and listening to her talk made me realize that I will ALWAYS have so much to learn about myself and this cute little vehicle of mine that is currently going through a bit of a tune-up. Ok, fine, a major overhaul. And it is scary being where I am with very little control over what is to come.

My lack of mobility does not make me any less of a yogi. Truth is, there is far more to yoga that what most know it to be – the postures. Yoga is now. Not two months down the road or yesterday. It’s right now; what you’re doing, how you feel and being ok with ALL of it.

BOOM. This is my yoga. Physically doing less. It’s all a journey. Pain included.

After Friday’s workshop we went out for something else Alex and I share a fondness for: wine. It was then that I expressed how uprooted and disconnected I felt being a 30 year old woman in my current situation without a job. The response is truly what stirred shit up in my soul in the best way possible:

What I lack in money, I make up for in community.

Me being me, authentic, non-conforming, always challenging the status quo and passionate about human connection. Some of us are put on this earth to walk the path of pain, take what we have learned and break things. So here I am, alongside many others, here to erradicate and abolish any and all stereotypes, boundaries and judgments.

When we sit still, watch and just be with what is, we learn.

Thank you to Alex and all of my biggest teachers for playing on my team, slowing me down, opening my eyes and blazing the perfectly imperfect trail alongside me.