On Sunday afternoon, I picked my mom up from the airport. After running around and getting some last minute things squared away, we ventured back to the hotel. That night we went into downtown West Palm Beach for dinner, took a little drive for frozen custard and then illegally parked the car to get a front row seat for the Sunfest Fireworks.

An alarm for 1130pm the night before surgery wasn’t necessary; sleep was out of the question. The rule before surgery is nothing to eat or drink after midnight. Obviously that calls for a celebratory? bowl of granola and almond milk. (Little did I know that it would be my last meal for nearly a week.)

After very little sleep, my alarm went off again; 430am. Whoop-a-dee-do. The day was here. My pain was so bad that I could barely get out of bed. Tired, terrified and in pain, the word spinal fusion continually surfacing in my mind. Was this really happening?

Packing up what toiletries and comfy clothes I’d need post-op, I tried to imagine what my life would be like without the debilitating pain caused by the stenosis. It had gotten to the point that I could barely walk a half of a block. Since we didn’t have a wheel chair, mom had been using the luggage cart from the hotel to get me from the room to the car.

As I waited for my chariot, I put my headphones in. Music keeps me sane in times of high stress. In that moment, it was also helping to keep my heart rate down and my eyes dry. I felt like a division one athlete about to enter a very stiff competition; you know that feeling of adrenaline pumping through your veins and the unknown outcome? Yes, that.

It was a quiet, short car ride to St. Mary’s Medical Center. I limped into pre-op and checked in with the receptionist at the front desk. When she asked why I was there, I opened my mouth with the intention of telling her ‘surgery’ but no sound came out. She quickly caught on that if I tried a second time, the dams in my eyes would let loose. “Are you here for surgery, honey?” I nodded. Bless her.

One of the pre-op nurses came into the waiting room and brought me back into the room where all of the patients go before signing their lives away to their doctors and heading into the operating room. They already had a gown laid out for me and IV tubing prepped and ready. By now I felt like a veteran with the process; pee in a cup, change into the ever so flattering moon and stars gown, IV in, Fall Risk, ID and Allergy bracelets on, warm blankets and contacts out… As soon as I was snug as a hurtin’ little bug in a rug, they called mom back.

Shit was getting real. The PA’s were in and out in their green scrubs for hugs, last minute signing of paperwork and then it was time to be moved into the Main OR pre-op area. On the outside, I tried to keep my cool; asking for another warm blanket and keeping my headphones in place. On the inside… yeah… you know, I was just thinking about how excited I was to have my back cut wide open and more hardware put into my body, the easy recovery process, physical therapy pulling me out of bed the day after surgery and the yummy hospital food that awaited me. NOT.

What happened next went quite quickly and is a bit of a blur. As soon as I was wheeled into the next ‘holding area’ the anesthesiologist popped by and with one look at me and then my paperwork, knew it was time to medicate. The spine team who would be in charge of monitoring my spinal cord function was standing at my bedside saying something about sticking needles in my hands and feet among other locations and then hooking me up to some machine to make sure that everything was still working properly as Dr. Feldman worked his magic on my poor back. Then Dr. Feldman and PA’s John and Tiffany showed up. Right before I could lose my shit, the anesthesiologiist gave another push of meds and with that, I hugged mom farewell and rode off into the OR.

The beeps, sickeningly sterile perfume that lingers in the air, bright lights and bone chilling cold – nothing about the OR had changed. Everyone was masked and wearing those attractive bouffant caps. If I didn’t know any better, I’d have thought I was abducted by aliens. The familiar faces beneath the masks confirmed my reality of being in the operating room, only minutes away from being drugged unconscious.

Because I was in so much pain and could not lay flat on my back, the drugs started flowing through my veins while I was on the gurney. BOOM. That’s where my conscious story ends. My life was in the hands of the medical staff at St. Mary’s Medical Center and Dr. Feldman.

Here is what I do know, once I was out cold, I was prepped for the actual surgery; intubated, etc. The spine team who was in charge of monitoring my spinal cord function throughout the operation began the process of inserting the sensors to do so. How you ask? Needles. Feet, hands, arms, legs and head and then somehow, wires I’m assuming, are connected to a computer. Apparently, once all was said and done and they were ready to begin, they rolled me onto my stomach so that Dr. Feldman could work his magic. However, my spinal cord was so severely compressed that they lost signal from the majority of the sensors. Not. Good.

Dr. Feldman later explained to me that in that moment he had two choices: roll me over onto my back and cancel the surgery leaving me the only option of continuing to live the rest of my life in a wheelchair OR continue very carefully and make shit happen. That man made shit happen for sure. And that man, he is a hero of mine.

Nine hours later, I was wheeled into recovery looking like one hot, drugged up mess. Here’s a little peak into the glamour that is waking up from major surgery. Slightly cross-eyed and on oxygen. Now you all have seen me at nearly my worst. But who is kidding anyway, I am an open book. Thanks mom for this beaut. 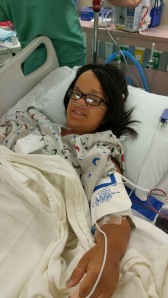 Do note the glitter polish. Ignore the rest.

I will say, however, I still had my wit. One of the PA’s that works for Dr. Paley and Dr. Feldman was giving me a hard time about there still being glitter nailpolish on my finger nails. I informed her that wherever I go, glitter goes – in one form or another; it’s in my veins. Apparently it was then that we instantly became friends. My last statement to her before I was rendered unconscious by my IV cocktail of medications was this: “Remember, dear, glitter is the herpes of the craft world.”

2 thoughts on “Making It Happen”